Russia has the potential to produce and export renewable electricity, green hydrogen and other products with a low carbon footprint. 2020 can be considered the year of wind generation in Russia, when, despite the COVID-19 pandemic, it was possible to launch a large number of industrial wind power plants. The main obstacle for wind power in Russia is the small domestic market, secured by a state support programme, due to the lack of a climate and environmental agenda in the country. The study pays significant attention to promising market niches for wind power in Russia, such as retail electricity markets in energy deficient areas. 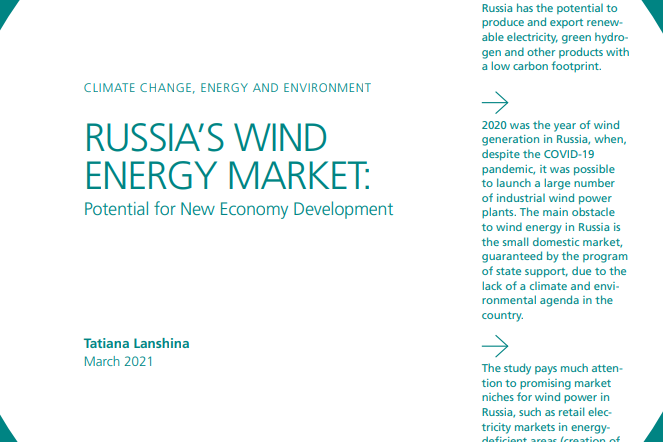 Moscow/Bonn, 16 March 2021 – After the Paris agreement has entered into force, the world is moving towards climate neutrality. Many countries including China, the USA and the European Union, have officially declared their goal to reach climate neutrality in the coming decades. Russia hasn’t officially declared this goal yet, but it has shown promising signs with the ratification of the Paris agreement and several roadmaps, e.g regarding the future of energy or hydrogen. As the energy sector is the primary source of greenhouse gas, this will have a deep impact on the way the world uses energy, and it will drive the switch towards renewable energy. While some countries, including China or Germany, have already made big steps towards a renewable and climate neutral economy, Russia has just recently started to move in this direction.

However: Four years after the first comprehensive analysis of the Russian wind energy market was undertaken, interesting new developments have happened. With today a total installed wind power capacity of around 1 Gigawatt, Russia has appeared on the global wind power map, although the country is not yet amongst the big wind power nations. In particular the past year 2020, the year of COVID-19, brought an impressive 700 Megawatt of new installations.

After the results of the previous FES/WWEA study on wind energy a few years ago showed that Russia has an enormous wind power potential, this study now presents an in-depth and detailed analysis of the current wind sector and its strengths and weaknesses.

Lisa Gürth, deputy head of office of the FES Moscow office: "The study shows what great potential Russia has in the field of renewable energy, but also how much still needs to be done. We hope that this study will contribute ideas to a development path for a more just and climate-neutral world."

Stefan Gsänger, WWEA Secretary General: “Russia is about to re-enter the global wind power landscape, after several decades of absence. In light of international developments, the country should now accelerate harvesting its huge wind and other renewable potentials, for the benefits of its citizens and communities, and for the environment and the climate. With a clear national renewable energy strategy in place, Russia can soon become a global leader in renewable energy.”

The study can be downloaded in Russian and English language.

The Friedrich-Ebert-Stiftung (FES) is a non-profit German foundation funded by the Government of the Federal Republic of Germany, and headquartered in Bonn and Berlin. It was founded in 1925 and is named after Germany's first democratically elected President, Friedrich Ebert. FES is committed to the advancement of both socio-political and economic development in the spirit of social democracy, through civic education, research, and international cooperation. Friedrich-Ebert-Stiftung is the oldest political foundation in Germany.